The explosion of a SpaceX rocket on the launch pad last Thursday reminds us of a basic problem with the current state of space transportation: rockets go boom.

Our current best idea for sending people and machines into space is to strap them on top of a giant tank full of highly explosive materials. SpaceX’s Falcon 9 uses about 46,000 gallons of liquid oxygen and nearly 30,000 gallons of rocket-grade kerosene. When you’re dealing with a massive vehicle hauling that much flammable material, a lot of different things can go wrong. Seals can crack, software malfunctions, internal supports break. Elon Musk recently summed it up: “Rockets are fundamentally difficult things.”

The reason the challenges of rocket power are so intractable has to do with the basic physics and power-to-weight ratios involved in a method that relies entirely on chemical propellants for lift. In order to carry a payload all the way up to Earth orbit, a rocket needs a very large amount of fuel, which it needs to carry with it, which means that it also has to lift the fuel itself, which requires even more fuel, which—well, pretty soon you have something like the Falcon 9, which weighs about a million pounds to deliver about 50,000 pounds of payload to low Earth orbit, or less than 20,000 pounds to geosynchronous orbit. It’s the vast ratio of explosive propellant to a very small cargo that makes it such a dangerous and expensive way to travel.

And that’s a big problem because to be truly in a Space Age, we need spaceflight to become routine, which means: inexpensive and safe.

Rockets are inherently expensive because they require massively large vehicles that are always going to cost many millions to build. SpaceX has made progress toward building a partially reusable vehicle, which will reduce costs somewhat, but the sheer size of the rocket and the amount of fuel it requires means that it is never going to be anywhere near cheap. And when a significant percentage of rockets go boom on the launch pad, along with their payloads, it just raises the costs back up again. That also means it’s not very safe for human passengers.

With this launch-pad failure, SpaceX’s success rate is still 93%, only slightly below the industry average of 95%. (Only one of its competitors, United Launch Alliance, has a perfect record—so far.) And that’s pretty much in line with the history of space exploration to date.

This is also true of innovations like Virgin Galactic’s SpaceShipTwo, which has had one fatal accident due to pilot error during a flight test, making its bid for a space tourism business look a little more adventurous. That doesn’t mean it won’t find passengers, in the same way hundreds of well-off people sign up every year for a pretty decent chance of dying on Mount Everest. But the rest of us will just book that cruise. 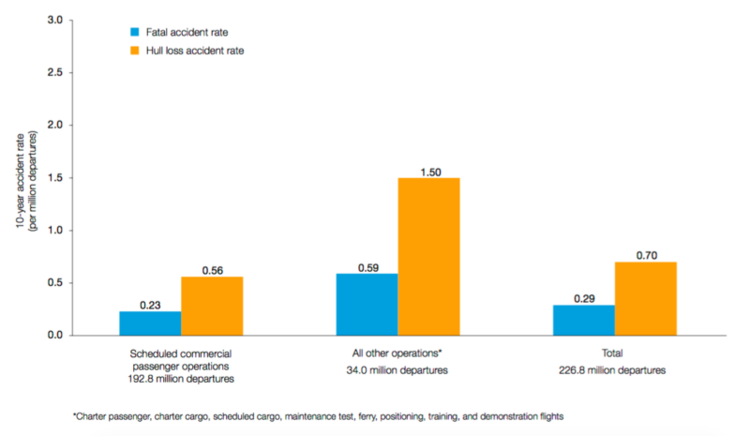 The Concorde was canceled a few years after its only crash produced a fatal accident rate comparable to 11.64 per million departures.

And there’s the rub. If I told you: get on this airplane, we have a 93% success rate—would you get on? Rocket-powered spaceflight would have to improve its safety record by at least three orders of magnitude and ideally five orders of magnitude for it be considered safe and routine in the way we consider air travel routine.

Maybe it’s possible to do that with rocket-powered vehicles. The fact that it works as often as it does is already an amazing achievement. But it’s a pretty mature technology, having been used to successfully launch things into orbit for nearly 60 years. If it were going to get radically more reliable, that would probably have happened already.

There is interesting work being done on SSTO (single-stage-to-orbit) space planes that take off like a traditional jet airplane and switch to rocket power for a shorter time at very high altitude. (The Chinese are also working on it.) Its ability to rely for much of the flight on aerodynamic lift, like a traditional airplane, means that it requires far less fuel, which reduces both the cost and the danger.

Other concepts for getting off the planet, like a space elevator, are far more speculative—more of a concept at this point than an actual technology.

Until some such new invention radically decreases the costs and risks of getting out of the atmosphere, spaceflight is going to be the kind of activity where you never quite know if you or your cargo will make it there in one piece. This limits unmanned spaceflight to extremely high-value uses, and it limits manned spaceflight to a few brave explorers or private thrill-seekers.

But we won’t reach a future in which space travel is routine until rockets stop going boom.